Thanksgiving day found us staying home in the morning even though it's Thursday and we still haven't made it to the Thursday market in La Penita.  Yesterday the painters didn't show up and we sat around the motorhome all day.  Today, thinking that they were not coming again we decided to wait until it was time to leave to meet our friends Fred and Sherry for lunch at 11:00.

However about 10:15 just when we were getting ready to leave, the painters showed up. The boss was with the paint crew and I told him the stripe that was painted yesterday looked too much like dark brown and not the cranberry red we asked for. His response was "no problem" and I showed him the broom we have that has a nice cranberry colored handle. In just few minutes he had the color we wanted mixed up.

They spent the day masking the stripping, then applying primer and finally two coats of paint followed by a couple of coats of clear sealer. The result is looking good and the boss held up the broom beside the painted stripe for my approval. I was told the paint crew would be back tomorrow morning to start on the background grey and white colors. .. we'll see.  I was also told that they should have the whole job completed by next Wednesday... again we'll see.

We made it to lunch with Fred and Sherry where we ate just a little as we were invited to a Thanksgiving dinner at a local bar on the beach that's frequented by Canadian and American snow birds here for the winter season. Instead of Turkey, stuffed chicken breasts with potatoes and vegetables was served along with pumpkin pie for dessert.  We were pretty full so took the pie home with us to eat later. Fred and Sherry are going to a Thanksgiving Pot Luck at their RV park.

Getting the Dutch Star prepped and painted 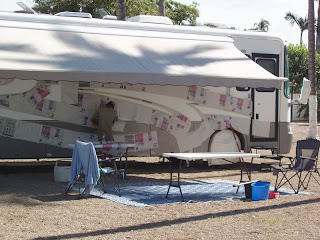 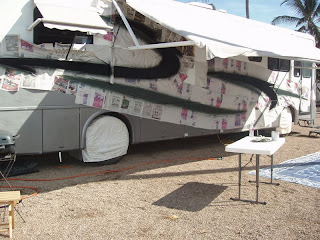 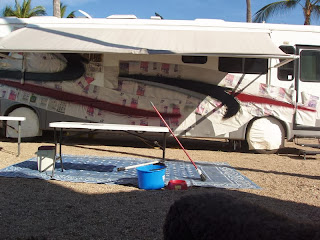 Posted by Graydon and Diane at 7:12 PM