Its still pretty warm here during the day but it rained last night.. probably just going to raise the humidly.

Janelle and Trent the park owners arrived yesterday afternoon after a drive down from Sacramento. Their house here at the park was burglarized several months ago and all the small appliances and dishes were stolen. Fortunately no windows were broken but they're still having to replace a bunch of things. 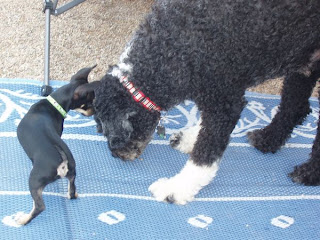 We met a local family (mother and two young daughters) who wanted to improve their English skills so Diane volunteered to help them a couple of times a week after school. Maybe we can do a bit of a trade and they can help with our Spanish. 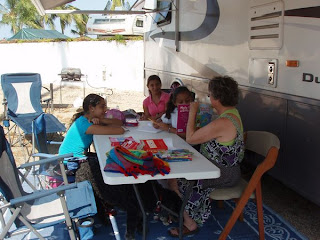 I took Leo to the groomer this morning. We decided instead of leaving both dogs there all day we'd do them one at a time and one of us would stay there the whole time. Because of Leo's tight curry coat, it took about four hours for a trim and bath. Cost $300 pesos. It's Hayley's turn tomorrow morning.
Posted by Graydon and Diane at 2:56 PM 1 comment: