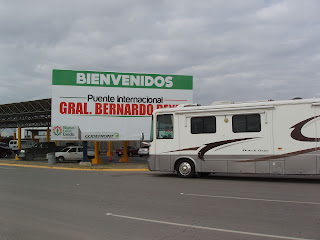 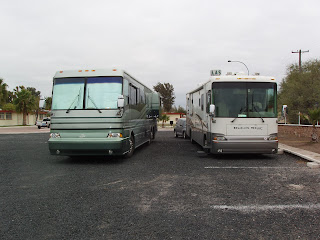 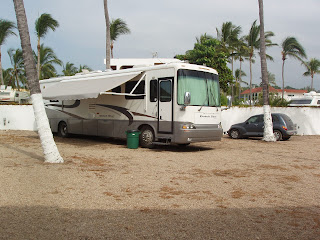 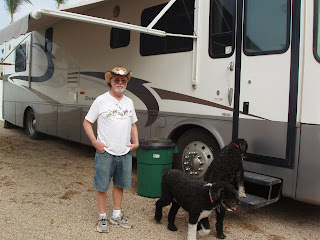 Graydon and pups at Heaven's Gate 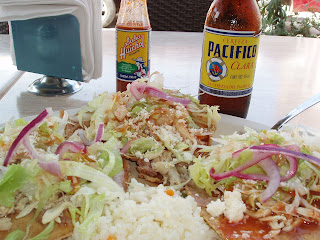 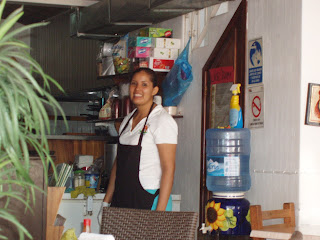 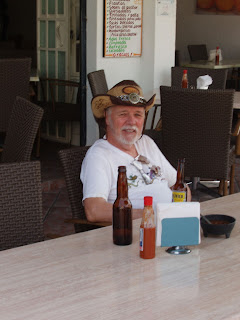 Graydon having a beer and lunch
Posted by Graydon and Diane at 6:18 PM No comments:

We've been out of internet service for several days but we arrived in La Penita on Monday night about 5:00pm monday night. No one was at our campsite to open the gate so the first night was spent at a Pemex on the north side of town. We've done the same thing in the past, the only bad thing was the loud music starting in the early morning hours followed by rooster crows soon after.

Our drive from Matehuala to south of San Louis Potosi was on some very rough roads that shook everything on the motorhome. We spent the night in a small truck stop on highway 80 where we stayed before. There were no hook-ups but the price was only 70 pesos and that included breakfast in the morning. While there Jeremy our travel buddy discovered a broken pin on his tow hitch but was able to replace it with a spare.
The next morning, shortly after we were on the road, Jeremy called on the walkie-talkie to say something was wrong with his hitch. One arm of his hitch was not locking in place allowing his towed truck to move side to side. We decided this was a dangerous situation and detached the truck so that Jane and Diane could drive it while following Jeremy and me in our motorhomes.

We continued on to Guadalajara taking the by-pass around the city to highway 15 north. The road down the coast from highway 15 is a very windy, narrow road that is terrible to drive at the best of times. However it was a long holiday weekend in Mexico (independence day) and thousands of people were returning home from the coast. We were almost run off the road several times by big tour buses.
We're all alone here in the park although the little gate house is rented to a lady we have yet to meet. She is gone for several days but expected to return soon.

We were able to contact Jack, the park owner's father who opened the gate and guided us in. Caution needed to be taken getting the Dutch Star through the small streets to the park with cars parked on both sides of the street.  Jack had to climb up on the roof of the Dutch Star as a low hanging telephone cable got hung up on our DataStorm dish. Fortunately I didn't pull the whole cable down..

In the afternoon we walked to our favorite restaurant where we were greeted by the waitress we became friends with last year. Tomorrow we'll finish getting the Dutch Star settled in and maybe take the pups to the beach.
Posted by Graydon and Diane at 4:41 PM No comments: