We stayed around the motorhome this morning waiting for the painters to show up but they didn't arrive till later in the afternoon.  We went to La Penita after lunch and Diane wanted to visit an optometrist to see about getting a pair of prescription sun glasses. We found Duran Cruz,  an optometrist at Opti-Duran a couple of blocks off the main street. Diane gave him a copy of the prescription for her glasses she got in Livingston and after explaining what she wanted was told it would cost 2,000 pesos and he would deliver them to the RV park next week.

When we left the optometrist we were getting hungry so stopped and had fish tacos for lunch. Then bought some orange juice and cereal and headed home. When we got there we found that the paint crew had arrived when we were gone and they were busy masking the bottom grey area of the motorhome for painting.

The painter brought his young kids (2 boys and a girl) as today was a school holiday. Diane and I had brought a bunch of school supplies with us from Livingston and we made up a package for each of the three kids. They were really surprised and happy and thanked us over and over. 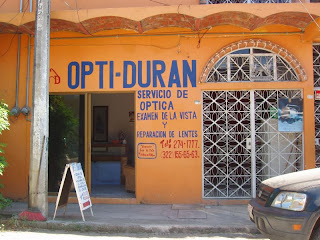 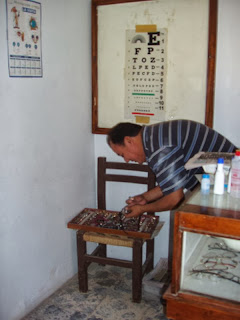 Posted by Graydon and Diane at 6:43 PM