I've been negligent with my posting for the past few days but we did arrive in La Penita although having a few more misadventures than we usually have.  After leaving Casa Blanca State Park we crossed the Columbia Bridge about 8:00am on Sunday, the time the Mexican Immigration office opens. Although crossing the bridge on a Sunday avoids a crowd of people, but because it's Sunday, there's only one Mexican official working the permit counter.

They now have a large x-ray facility at Columbia where we were directed to go. Diane had to leave the motorhome with the dogs while I drove up and parked on a platform. I then had to get out and was directed to wait behind a concrete wall while the x-ray scanned the motorhome.  No problems but you don't want to be in a hurry.  In all it took us about an hour and a half to get through everything.

South of Saltillo on highway 57 local farmers will have large bags of potatoes for sale along side of the road. We have seen this before on our travels but never stopped to buy any. This this time curiosity got the better of me and I stopped to check them out. There were two sizes of bags with the smallest costing $100 pesos. Although being small the bag weighed about 40 pounds. Nice white potatoes should taste good when we get a chance to cook some. Although we knew we'd never eat them all but knew some people in La Penita that would be happy to have some.

Potatoes for sale on the side of the road 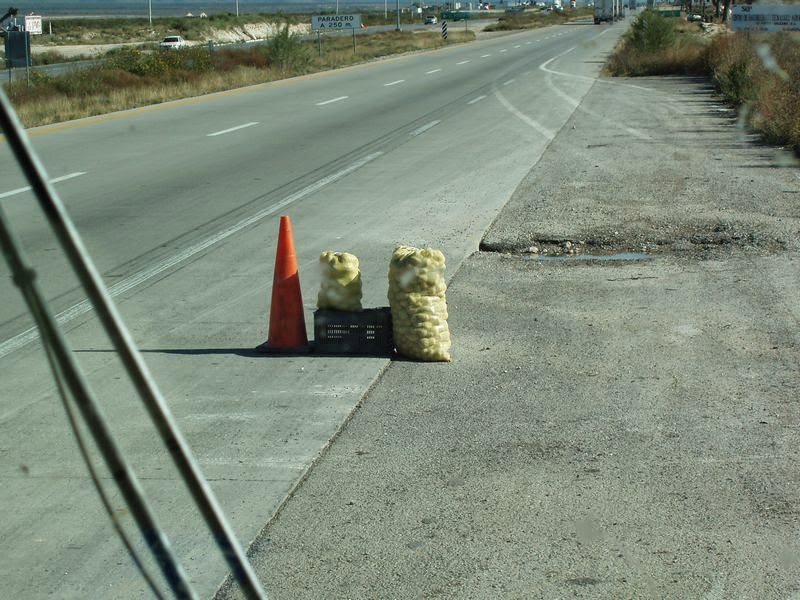 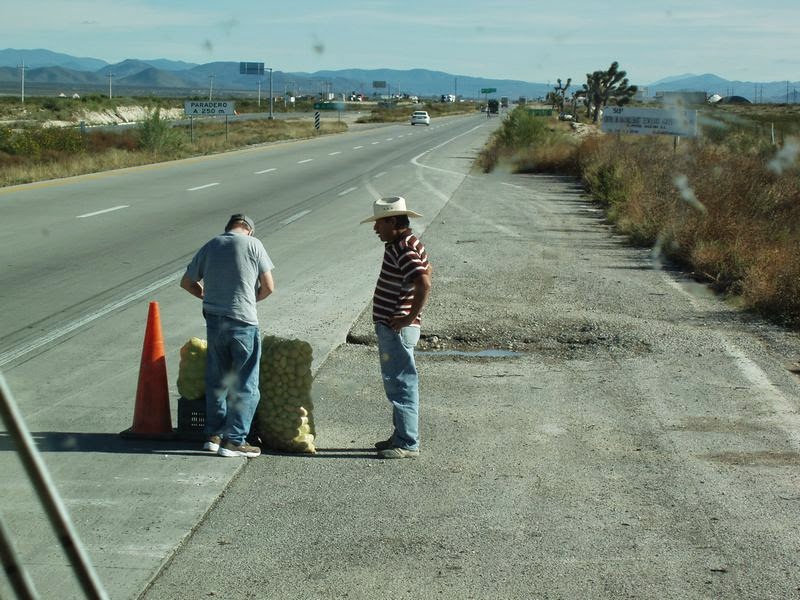 Sack of potatoes for $100 pesos 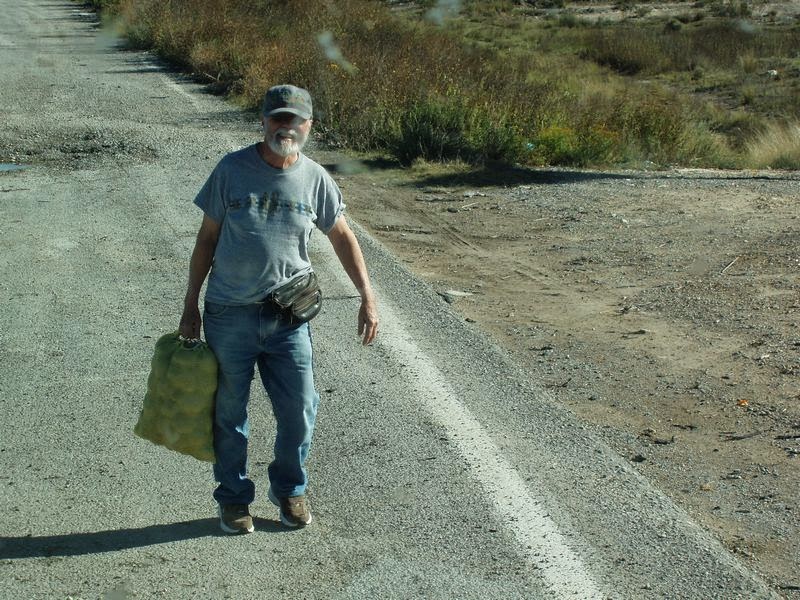 We arrived at La Palmas motel/rv park in Mateuala after driving 375 miles at about 4:00pm  After dinner at the motel restaurant we headed for bed. There were two other RVs from Canada in the park but each was hauling a small trail bike behind their coach and we didn't get to meet them. 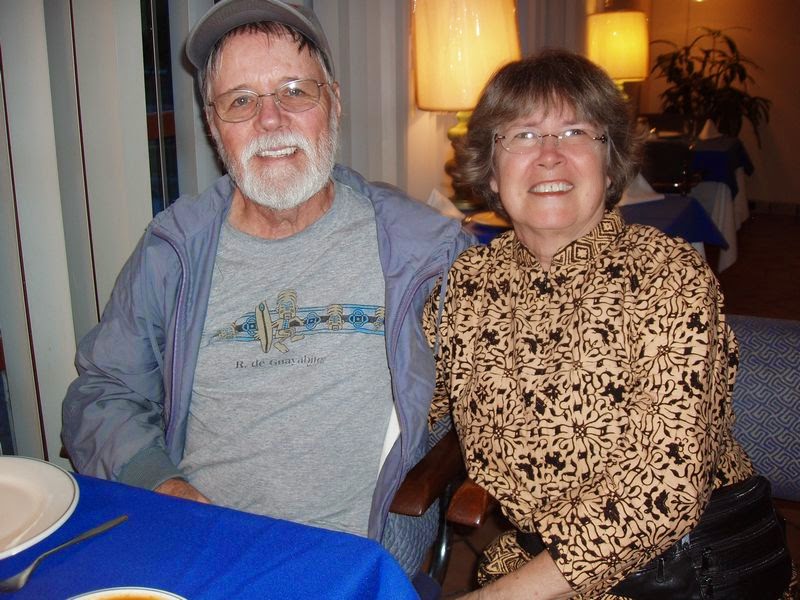 The next day we were off to the Truck Stop south of Lagos de Moreno on Highway 80. We've stopped there each year and found that they raised the price of overnight parking from $70 pesos to $100 pesos. but that included a security guard walking around the parking area all night.  One funny thing happened in the morning when I took the dogs out to go potty. When they were finished and I was taking a plastic bag out of my pocket, the security guard ran up and waived saying "no, no necessisita" "the trucks will drive over it and it will be gone"

The truck stop has a small bbq service and after we had some delicious tacos we headed for bed.

We always seem to have trouble getting on the correct highway south of San Luis Potosi and we did it again somehow getting on the road to Mexico City. Fortunately they have a lot of "Returnos"  and we were able to get back on the right path.

Day three had us heading for Guadalajara where we normally take the by-pass "Periferico" around the city which starts at Tonala.  We approach Guadalajara on highway 80 which is a 8 lane freeway and normally we just watch for the Tonala exit. Well.. they did some construction around the exit and changed the exit sign causing us to miss it. That had us heading to down town Guadalajara which is bad enough in a car let alone a large motorhome.  We got off the freeway at the next exit and saw a traffic police talking to someone he pulled over. We parked behind his motorcycle and waited for him to come back to talk to us. We explained what happened and asked how we could get back to the Tonala exit. With our limited Spanish and his limited English plus looking at maps he finally said to follow him. We would have to turn around but because of our size he first had us follow him to a wider spot in the road. There he stopped traffic for us to make the turn. Shortly after following him through back streets and over the freeway he got us back to where we wanted to be. He stopped and after thanking him I gave him $300 pesos.  He wasn't asking for any money but we felt $300 pesos was definitely worth what he did for us.

It started to rain later in the day and after getting past Guadalajara and driving on highway 15 in the mountains near Compostela, the windshield wiper arm on the passenger side completely broke off. We were on a two lane mountain road and had to drive with the wiper dangling several miles until there was a place to turn off. I had to unbolt the broken wiper arm and drove the rest of the way in the rain with only a wiper on the driver's side.  Fortunately the one that broke was on the passenger side otherwise we'd really have trouble.

We made it to the Pemex just north of La Penita where we had planned to stay for the night as we were meeting Jack, the park owner's father at the park at 9:00am the next morning. Jack came by to tell us he had to do something in the morning but would be a few minutes late.  We disconnected the car and drove over to the park in the morning

The road off the highway heading to the park is narrow and there's usually a lot of cars parked on the side of the road. On the corner of the highway and the road there were several cars parked on my left and a flat bed truck on the right. As I turned off the highway I knew that it was pretty narrow between the cars and truck but thought I could make it... NOT... the arm of my awning caught the mirror of the truck tearing it off and as well as tearing off the awning arm. The truck owner came out and after seeing the damage told me he'd try to get his mirror fixed but if it wasn't fixable I would have to pay for a new one.  I told him where we would be for several months but still haven't heard from him.

After that whole thing, I continued on to the park where we found the road mostly flooded. A person who lives on the road near the park decided on his own to hire a backhoe to scrape several inches off the road to lower it so the water would drain.  All he did was make it almost impossible to back into the rv park without having to put planks of wood under the tires to raise the motorhome  high enough so that the transmission would not drag going in the entrance. to the park.

While all this was happening another guy showed up saying that after my episode with the truck mirror and awning, I apparently pulled down some electrical cables crossing the street.  Another person told him to just call the electric company and they would re-connect the wires.

The old Dutch Star finished the day  with another 264 miles and has now passed 100,000 miles.  We obviously need some work done on it but we're sure everything will be fixed.