Diane spent the morning at the school where she's helping young kids with their English. She's having a fun time and works on her lesson plan a couple of days before her work with the kids.

The owners of our RV park had to drive their recent house guests back to the airport in Puerto Vallarta this morning but before they left, tree trimmers who were to come tomorrow showed up a day early.

The park has six big palm trees plus one dead one in the area where the RVs sites are. The tree trimmers go up to the top of the trees and cut away branches and small coco nuts before they grow big and become a danger by falling.

I spent the morning watching them work as they use only the most basic tools. Two loops of rope are used to climb the tree. One foot goes in one loop and the other leg goes through the other loop. This way they can put their weight on one or the other loop while shoving the other loop higher up the tree.

No chain saws or other saws are used. All cutting is done with a machete. All six trees were trimmed in this manner and the machete was also used to cut a couple of six foot pieces off the top of the dead tree before using an axe to cut the remaining section of the tree down.

When Diane came back from the school we walked into town to have lunch and pick up a few groceries. Thursdays are market day in La Penita and the town was packed with people. Even one of our favorite restaurants where we get our fish tacos didn't have an empty table. We decided on another restaurant and then bought a few wine glasses and a six pack of beer before heading back to the park.

Its been a little cool the last couple of days with winds strong enough for us to bring in the awning of the motorhome... better to be safe and not have it get damaged. 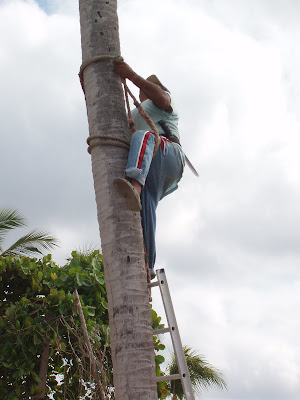 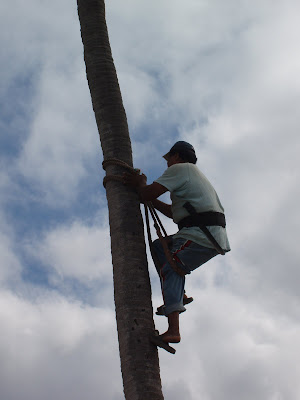 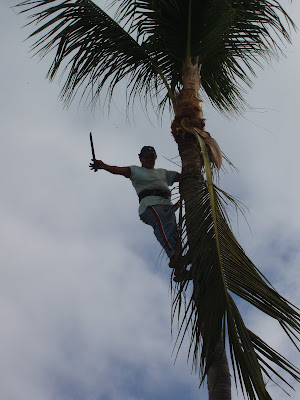 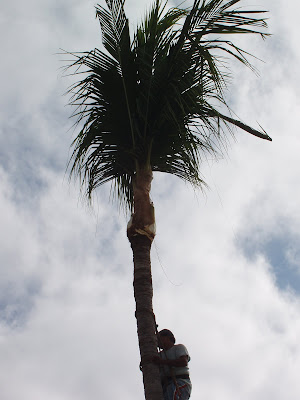 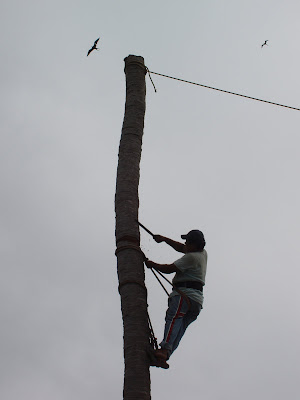 Posted by Graydon and Diane at 4:54 PM