Here's hoping everyone had a safe New Year's Eve and their 2012 will be the best yet.

On New Year's Eve we went out to an early dinner and then came home and watched a movie. There was enough fireworks going off in town and on the beach to keep the pups wishing that it'd all soon be over but no such luck. We watched and listened until we got tired and ended up going to sleep long before midnight. (we're real party goers)

Today will be spent at the park as the roads will have more than their share of drunk or "hung-over" drivers.

When we were talking to our friend Hector, the man who helped when the car broke down and now a local restaurant waiter, we found out that his young son has dreams of getting a horse and has several western style hats. I make hat bands using pull tops from cans and conchos I buy at a hobby store. Thats how I spent the afternoon today, making a hat band for Hector's son. 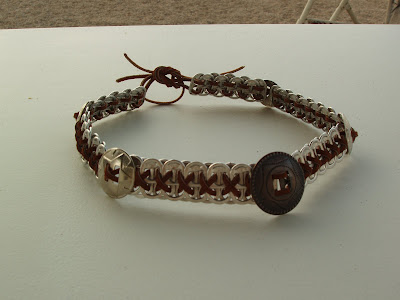 Posted by Graydon and Diane at 9:15 AM