We made it to La Penita yesterday afternoon and met with the park owner's parents this morning to open the gate and let us in.

We met up with a couple in Laredo (Rudy and Cathy) who had been to Mexico numerous times but had never driven there. They were heading to the Yucatan but wanted to travel with someone for the first day as we were all going in the same direction. They stayed with us for the first day that got us to Matehuala on highway 57 where we stayed at the Las Palmas hotel. There's an RV parking area in the rear of the hotel where we've stayed before. 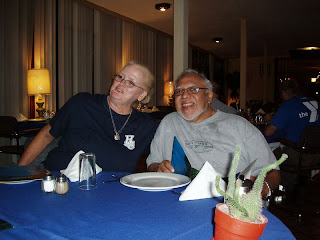 
The trip was good except that we ran into rain each of the three days. We were the first ones at the border and got our visas and vehicle permits with no problems. However on highway 85 south of Nuevo Laredo we were pulled over for an inspection and had to have the motorhome go through an X-Ray screening. This was at a new inspection facility as it wasn't there last year. The only problem was the hour plus time to go through the whole procedure.

Our travel buddies went on their own way for day two and Diane and I headed down highway 57 to San Luis de Potosi. Our plan was to stop for the night south of San Luis de Potosi however major road construction prevented us from getting to the planned truck stop. We continued on towards Guadalajara thinking we would spend the night in a large Pemex gas station but decided instead to stay in a parking area of a highway toll booth station. Because the toll booths deal with lots of money you always see armed guards there so we were not concerned about our safety.

Day three got us to La Penita about 2:30pm (we gained an hour going into Mountain Time) and stayed at our planned location, a large Pemex gas station on the north end of town. We've stayed there several times before with no problem.
We spent a total of $5,247 pesos ($404.73 dollars) on diesel fuel and $3,049 pesos ($235.18 Dollars) on toll charges. Again as the last two years we are the only ones in the park.
Posted by Graydon and Diane at 3:57 PM

But we will be at the park in Feb. Good to see you are safely there.