Its been a busy day.  Yesterday there was a couple of old lounge chairs that were custom made with 1/4 inch re-bar for a frame that had been left by a former tenant at the park. The nylon strapping had deteriorated in the sun and they were scheduled to be thrown out with the trash. A man and his son asked several times at the gate about them and last night I told them they could have the chairs. This morning about 9:00am the man and son was at the gate with the two chairs completely restrung with new webbing. Apparently there was a miscommunication about the chairs and he thought I wanted them repaired with new webbing. His English was negligible and my Spanish is far from being able to explain to him that the chairs were a gift and I didn't want new webbing.

Fortunately after about 20 minutes, Kathy, mother to our RV park owners came by and was able to explain thing to the man. He was happy as he could now sell them and make a few pesos.... I'm going to have to keep working on my Spanish.

Shortly after the lounge chair situation was taken care of, the paint crew showed up and started masking in preparation of painting the bottom grey area of the motorhome. They worked until mid afternoon and the job is looking very nice. Everyone yelled at me when I thought the paint was dry and touched front of the motorhome with both hands. Fortunately they'll be able to buff out my handprints. The paint crew plans on finishing everything by Wednesday including buffing out the headlight and taillight lens ...and my hand prints. 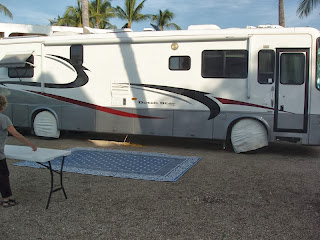 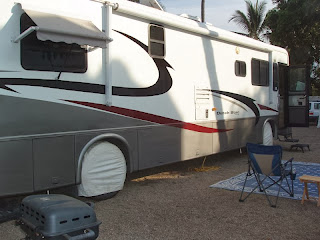 Janelle and Trent the owners of the park arrived in the afternoon after driving their truck and small trailer full of stuff from Sacramento.  They had a long and tiring journey in the truck with their two beagles and are glad to be here.

As we really didn't have free access to the motorhome during the day because of the painting we decided we'd pick up a bbq chicken from a restaurant close by. This place really knows how to bbq chicken and sells over a hundred each day. 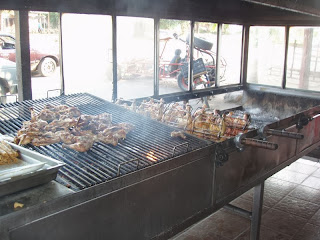 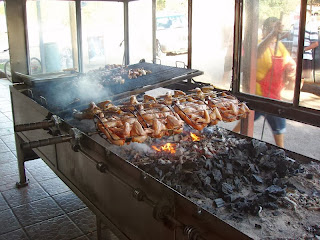 Posted by Graydon and Diane at 6:45 PM