After dropping off our laundry this morning we stopped at a local dentist in La Penita to make appointments to have our teeth cleaned. It's still early in the season so the dentist was having a special (when do you ever hear of that in the U.S. or Canada?) She was offering a two for one cleaning. Her normal price for cleaning is $300 pesos and for the same price we'll both get our teeth cleaned on Friday. .. a little over $23.00 Dollars.

After we left the dentist's office we drove over to visit our friends Fred and Sherry who are at an RV park in Ricon de Guayabitos just a few miles from La Penita.

Fred was having an autobody repairman come to buff out some scratches on his motorhome that happened on his way down from Arizona. Diane and I have been talking about getting some work done on our motorhome as it has its share of scrapes and scratches gotten during the past nine years.

We asked the repairman to come over to our park and give us some estimates. Shortly after we returned home the man showed up with a couple of his workers including one who spoke perfect English.

We decided to go with the full motorhome repair and repaint job as 40,000 pesos comes out to only $3,100 Dollars. Much much cheaper than if the same work was done back in the States.  They said the job would take about 10 days and they started removing the decals this afternoon.

I'll post a daily report on the progress along with some pictures. 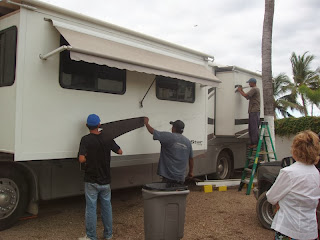 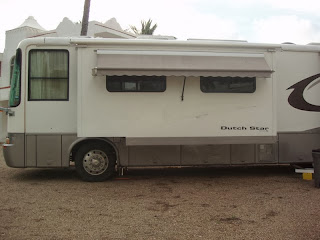 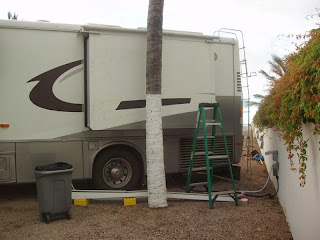 Posted by Graydon and Diane at 6:16 PM