First thing this morning, Martin, the mobile wash guy who is getting the cover to one of the roof air conditioners showed up. He said they were unable to patch the cover as the plastic was too brittle and kept breaking. So he is having a whole new cover made. He said it should take them about a week to get it finished. Maybe we'll see it this year.

Drinking water delivery is on Thursday and we needed to get two 5gal bottles. We waited until they showed up and then off to the Thursday market we went. Diane bought a new little carpet for the motorhome and also a new pair of sandals from the sandal maker we've gotten to know. He always remembers us because last year I made him a hatband.

This is a picture of a Santa we saw when walking in town today. 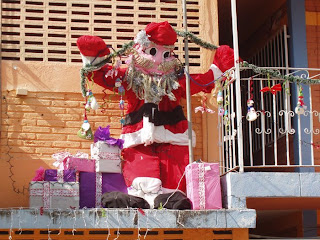 The sun goes down early and this was the sunset shortly after 5:00pm 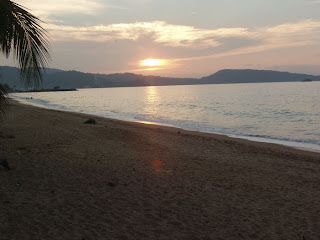 Posted by Graydon and Diane at 6:46 PM