After breakfast we decided to take the dogs to the beach.. not the beach in front of our park but down to the beach in Guayabitos.. about 2 miles away. When we got there we found the beach packed with people and beach vendors. We decided this was not the place to be and decided to drive down the coast about 10 miles to Lo De Marcos. We've been there before and remember the beach was usually uncrowded.

When we got there we found the beach practically empty and were able to take the dogs off their leashes so they could run and play in the surf. We had to be careful not to throw anything out for the dogs to retrieve as there's a strong undertow.  However as you can see in the pictures, they had fun playing in the surf. 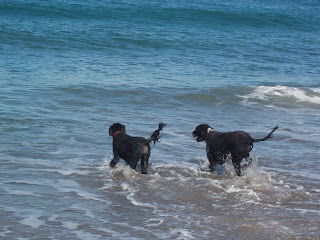 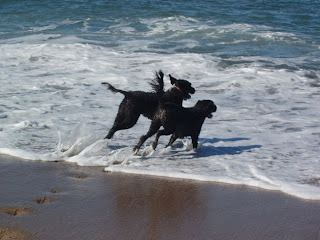 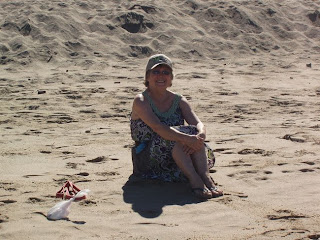 We returned home about noon and a short time later, Martin who had washed and waxed the motorhome yesterday showed up. He noticed a piece of the cover on one of the air conditioners had broken off and wanted to take the cover to a friend who could do a fiberglass repair. We got the air conditioner cover off and he said he'd return it Monday.

We lucked out on both of our searches. We were about ready to give up when we spotted the Mayan girls. One selling dresses and the other selling shirts. The shirt seller only had a few in my size but two of them I liked... total for two.. $300 pesos. I didn't even try to bargain. 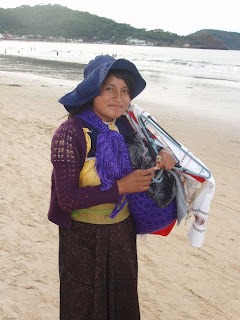 The restaurant's new location was at the south end of the beach so back to the car to drive the couple of miles to where we hoped it would be.  We were able to find it without too much trouble but found that the food was not up to their last year's standard. .. We'll probably not go back again as it's kind of out of our way and the food not that good. 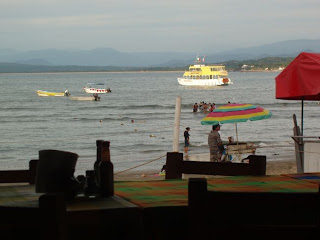 Posted by Graydon and Diane at 8:55 AM