After breakfast this morning I jumped in the car and headed to the beach at Guayabitos where local fishermen sell their catch early each morning.  There were three boats there this morning all with fish covering the bow of their boats.  These boats are small probably 18 to 20 ft in length and the fishermen spend all night out in the ocean.
When they come in they place their catch on the bow of the boat and their wives or other family member weighs and determines the price of the fish you choose.  The fisherman or one of his helpers will then fillet the fish if you want.

Bow of boat with fish to choose from 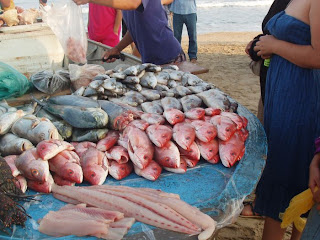 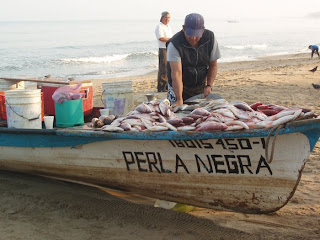 Getting my dorado filleted 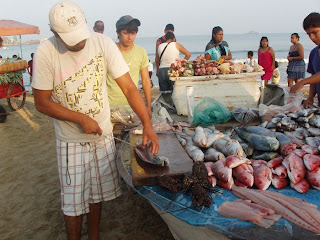 They also bring in shrimp that they get from the big shrimp boats that are seen off shore and these are separated by size and are in coolers with the wife who sells them along with weighing your fish. 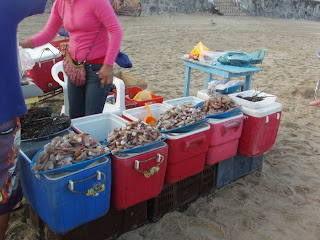 They were also selling a variety of sea shells 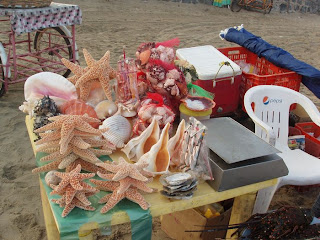 I bought a small dorado fish (about two feet long) for 65 pesos and a kilo (about 50 shrimp)  for 125 pesos. After stopping at a store in La Penita for a supply of fresh vegetables, one dorado fillet and about a dozen shrimp together with a variety of vegetables went in the crock pot... sea-food stew for supper..yum

The weather is sunny and warm with not too much wind so we let the pups run and play on the beach later in the morning.. They tired themselves out chasing the tennis balls thrown for them.