Shortly before 9:00am we loaded Leo and Hayley in the Jeep and headed to the Vet for their grooming session. We were told that they would be there for most of the day and should be ready about 4:00pm

Back at the RV park, not having the pups underfoot allowed for giving the motorhome a good cleaning inside. Any time we are parked at a beach and the dogs can roll in the sand a lot of it gets carried in on their feet and under the hair of their coats.

The RV park next to us scheduled a propane delivery today and I asked them to send the truck over to us so we could get our tank filled. The truck showed up in the afternoon but discovered something wrong with the guage that showed the amount of propane pumped. So no propane today but the truck is to return tomorrow. One thing I should correct... they don't sell propane in Mexico but rather butane.. Butane works just as well in your stove, water heater etc. The only difference is that Butane does not vaporize very well in cold weather so people from Canada or northern states have to refill their tanks with propane when returning home.

We headed back to the Vet at 4:00pm and the pups were just getting finished. The Vet said their hair was very difficult to cut especially when there was still a lot of sand in their coats. Apparently one of the clippers they were using gave out. But the haircut they ended up with looked good. The Vet quoted us 200 pesos each but we gave him 500 pesos as we knew Leo and Hayley were a lot more work than he anticipated.

Before they were ready to leave they had to have their nails trimed and I held them while the Vet did this. Both of the pups like most dogs hate having their nails cut which makes it difficult with them squirming around. Both of them ended up with a little bleeding from getting a nail cut too short. Hayley's was the worse and although the Vet applied some medication on the bleeding nail, she wouldn't leave it alone and had it bleeding again when we got home. We cleaned it and put a bandage on it and hopefully she'll leave it alone overnight. We'll see what it looks like in the morning. 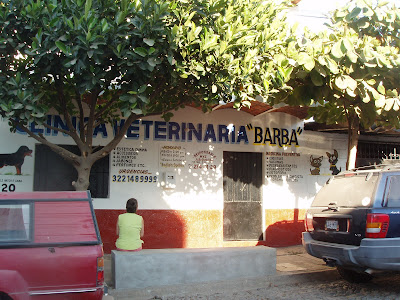 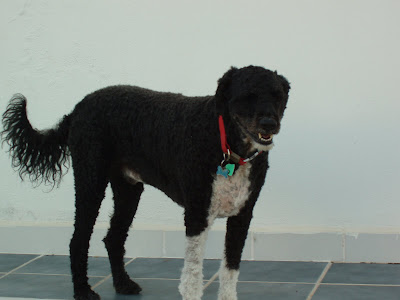 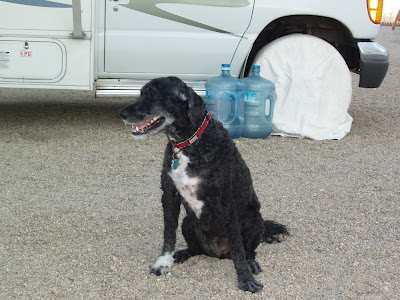 Posted by Graydon and Diane at 8:23 PM